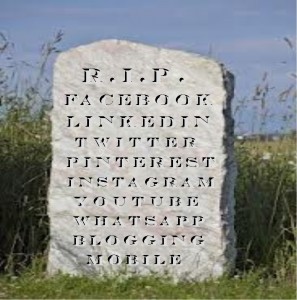 The article and survey lead with “62% of people participating in social networks say that those networks have no influence on their buying decisions at all.”

I read the WSJ article and the Gallup poll, and at first I was astonished as most of the WSJ’s readers probably were.  Especially all of the social media managers and V.P.’s of Social Media in Fortune 500 companies throughout the U.S.  I seriously considered that if these two bastions of business information and integrity said this, it might actually be true, but I instinctually knew better.

Then, I received this email from a reader of my book “The Social Media Bible” who asked this:

“I am a SCORE counselor from Phoenix who specializes in Government contracts. …I do have a question: a Gallup poll whose results were published recently, seems to conclude that on-line advertising is useless and a waste. Gallup concluded that only a tiny percentage of people even notice them. The study targeted Social media. 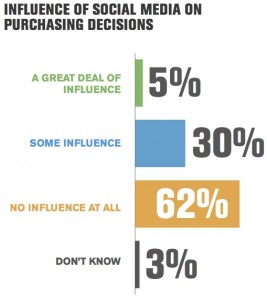 I am interested to read your reaction to that extensive survey from such a prestigious organization.

Jean’s email question forced me to take a more serious look at these serious accusations before I responded. 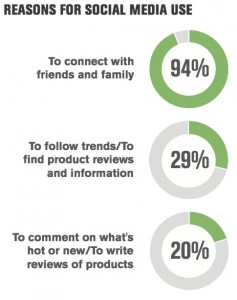 “Yes, of course, any attempt at marketing requires both excellent planning and effective execution if it is to achieve success. Social media marketing does not get a pass from that principle. But, just as it is true when you try to train a mule, it only works if you can get the prospect’s attention. An unseen pitch simply does not exist!

As I read the survey, the objective was not an attempt to measure effectiveness. The conclusion was that the message was not even noticed by the audience. It had become simply a part of the noise. That, as I, as a non-expert, see it as the real threshold to be crossed if any Social media campaign is to become effective.”

Where The WSJ And Gallup Went Wrong

Here’s my reply back:

“I would like to see a Gallup survey measuring the influence television commercials and print ads have on customers.  I bet those numbers are even worse.  True, with all of the noise out there, it is becoming more difficult to be heard.  That’s why social media is a good choice.

The poll said that social media has “A great deal of influence on 5% of the people polled”.  Direct mail has only 1/2 of 1% response rate.  That makes social media marketing 10x more effective than direct mail and significantly less expensive to implement.

The poll also says that social media had “Some influence on 30% of the buying decisions of the people polled”.  I don’t think one print ad could possibly influence 35% of its readers.  The reason 62% of social media participants polled said that it had no influence was, because the reader (watcher) wasn’t ready to purchase that particular product or service.  Lon”

This leads back to a concept that is seldom used by marketing people, but is understood by nearly all sales people; The Sales Funnel.

Just because you saw a truck ad or fast food ad on TV last night, doesn’t mean that you ran out and bought a big truck and a Big Mac® this morning before you went to work.  The ad had no influence on you whatsoever, because your weren’t ready to buy either product.  However, when you ARE ready to buy a truck or a burger, you will think of the person / company that is in the forefront of your mind from Facebook, Twitter, LinkedIn, etc., and you will most likely buy from them first.  The time that it takes you to go from first realizing that you need a particular product / service (awareness) until the time you actually purchase that product / service is call the Sales Cycle.

For a truck, the sales cycle could be several years and for a pack of chewing gum at the checkout isle it takes only 30 seconds.  The cycle is usually proportional to the cost of the item.  The truck has a very long cycle the gum, very short.  This is why, if you are a truck retailer, you have to stay in front of your prospects often and for a very long time to catch them at the very moment of awareness and influence them.

The The Wall Street Journal article and the Gallup Survey was wrong and has no value from this perspective.

I quickly realized that this is a bigger issue than I alone should answer, I sent this email thread to some of my close friends who happen to be top “experts” in social media from around the world.  Here’s what some of those experts had to say:

”Great article. Sensible companies like the Ritz Carlton are understanding the proper way to harness Social.”

“In response to the WSJ article- Its not terribly surprising that there’s a backlash against social media marketing. As in any unregulated industry, you will have some agencies and individuals who do their business superbly, and many who are riding the tide of the latest and greatest, who unfortunately do the industry an injustice, resulting in unhappy customers and unimpressive ROI and results.   I know social media marketing works- but its wholly dependent on the skill of the agency and the efforts of the client.“

Viveka von Rosen (One Of The Top 50 Most influential bloggers.)

“Social media can be a waste of time — if you don’t know how to use it. The days of broadcasting a bunch of Tweets or Facebook posts are over. Today, social media is much more nuanced and complex and includes everything from native advertising to social listening. In a nutshell, social media is way, way past the “give it to the intern” stage and well into the “give it to a seasoned professional” stage.”

“That’s interesting, but so predictable. Its subheadline says “A MAJORITY OF CONSUMERS SAY THEY ARE NOT INFLUENCED BY FACEBOOK, TWITTER”, but if you ask the question “Are you influenced by others opinion on products and services”, the answer would be 100% yes, and these “others” are people they know and trust, it would be 200% 😉

Social is just the channel to convey these opinions and amplify them. It always all depends on the angle of the question…”

“The Gallup Poll referenced by the WSJ article is interesting in that 62% of consumers said social does not influence their purchase decisions at all. Consumers don’t spend time attributing an item they purchase back to if and when they engaged or viewed brand content on social so it makes sense that 62% of consumers would state that social does not influence purchasing.

When brands focus on creating engaging campaigns that make fans happy the brand wins every time. Torani is doing a great job of this currently, leveraging the World Cup, through a fun and engaging Facebook campaign that is converting fans into email leads at a 75.47% conversion rate.

According to an internal research report done at Heyo, based off a data set of 202 campaigns launched between June 15th and June 21st, the average fan to email lead conversion rate was 12.2% across a sample size of 202 social campaigns. Going from fun and engaging contest to email lead is the first step in the social ROI funnel.”

“Social drives brand equity and sales, it creates an emotional connection with customers and helps build customer loyalty through evangelists, it leads to greater exposure through search. In short it is critical in driving market positioning from the 4Ps (Product, Place, Price and Promotion) that have been in effect since the 50s to the 4Es (Experience, Everywhere, Exchange and Evangelism) Here’s my piece on Forbes on the subject: http://goo.gl/htvnf.

Those who go through the trouble to create a general brand-awareness/audience connecting campaign through social media, see an increase in market share by then implementing very specific campaigns that are linked to short sale cycles. The “Old Spice” adverts that targeted influencers, reached all the way to Oprah and converted a larger slice of the target audience (women) are a case in point. Others are the Johnson & Johnson baby oil campaign in China, Pfizer’s dominance of the pharma league table for three years running now, Without a strong social component that is also amplified in search none of these would even have been possible.

Traditional companies with traditional mindsets use social to broadcast expecting it will give them the linear results of the traditional advertising. Well, that is like using a tennis racquet to paddle in the river, because it’s the same shape as a paddle. The results will be radically different.“

“Another great burst of useful information. To many people and corporations need to re-thinking Social Media strategy or tactics. Sounds like they “had to do the Newest Thing”, with out asking, how does it fit into our marketing strategy.”

What the WSJ article and Gallup poll should have said was “35% of all people who participate on social networks are influenced at some level to buying your products!”  That’s more than 1 out of 3!

But I guess that doesn’t sell papers or reports…